Over the past week, New York has been host to one of the most notable week long events in fashion: New York Fashion Week. As the week has gone on, one thing has become clear: this year, no one is afraid to get political. With the recent election and worldwide outrage in mind, it seems that the political aspect of this year has seeped into the fashion community.

Anna Wintour, pictured above, was spotted wearing a “Fashion stands with Planned Parenthood” button during a Brock Collection show. Wintour has not been afraid to make political statements in the past, especially with her endorsement of Hillary Clinton during the recent Presidential Election.

Christian Siriano’s show also got attention this week because of his political statements. He included people of all shapes, sizes, and colors in his runway show, as well as debuted a T-Shirt with the statement “People are People” printed on the front. Siriano will be selling his shirt on his website with all proceeds being donated to the American Civil Liberties Union.

Political statements could also be seen in the streetwear this week. Pictured below outside of a 3.1 Phillim Lim show are bloggers Bryanboy, Tina Craig, Aimee Song, and Chriselle Lim, as well as model Irene Kim. They are wearing black and white shirts with phrases such as “The future is female”, “Femininity with a bite”, “I am an immigrant”, and “we’re still here” written on the front. Their political message is styled in with each outfit.

Considering the current tense political climate of the United States, it is not surprising that designers and bloggers alike were making statements. This just goes to show that from streetwear to the runway, fashion is a channel for designers and fashionistas to get involved and speak out on their beliefs. 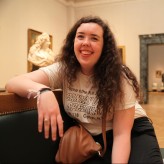