Just a few weeks into the Trump era, The Donald’s administration is already something of a disorganized, disaster, and according to the boss himself, not a particularly well dressed one.

Just four days into the Trump was thinking of replacing press secretary Sean Spicer for not lying forcibly enough about the inauguration crowd size and not dressing well enough, according to Axios.

“Doesn’t this guy own a dark suite?” Trump is said to have asked.

There is no question that Donald Trump is an incredibly visual politician. He apparently watches television constantly. During the primaries he went at Carly Fiorina, suggesting she was ugly. He regularly called Marco Rubio, “little Marco.” He even relies on looks when making decisions about important political appointees. In the New York Times fashion section Vanessa Friedman writes about Trump’s habit of describing people as straight from “central casting.” In all these instances we see The Donald drawing conclusions and making choices based solely on the surface of appearances, as they meet his eye.

So how has our President’s shallow perspective affected the fashion of the White House and the administration?

Trump definitely believes in the application of the power suit 100% of the time. He is always in a solid blue suite. In fact, he has been rocking the power suite since the 1970’s, when the whole concept of power dressing was born as a way for women to feel empowered in a male dominated corporate world.

There is much Spicer could learn from his boss in this regard. Spicer is not a physically imposing man, does not exhibit what Mike Pence regularly called the ‘broad-shouldered” kind leadership, and, when lying to the American people, his eyebrows droop at the edges, making him look like a little boy trying to do a math problem.

A real Trump-like power suite could help give him a more convincing look at the podium.

Kelly Anne Conway splashed like cannon ball onto the fashion world at the inauguration, dressing herself like a New England Patriots logo. I for one thought that it was hideous. She looked like someone in costume at a theme park. But that, of course, is the point. Time and again, Conway is trotted out to be the mascot of the Trump regime and express her allegiance through a mindless, chattering praise. Her outfit at the inauguration blended her role beautifully with the whole carnival atmosphere, the way a team uniform does

Ivanka on the other hand lends the administration something else. With her grace and sense of fashion she provides at least some semblance of credibility to her father, and he seems to know that. She is Daddy Donald’s “choice to ride,” as Migos and Travis Scott would say, in bad times and by far his greatest asset.

In her real life, Ivanka is like a character from Sex and the City. With her successful husband, beautiful children, and stellar career finds a way to dress with ease and confidence, in a manner that maintains her femininity with class, despite the heavy responsibilities she has as mother and a mogul. It is hard not to root for her.

But in Ivanka’s capacity at the White House, she has taken on a surprising resemblance to Hillary Clinton, of all people. At the inauguration, both Ivanka and Hillary arrived dressed in all white variations of the pant suite. Now more recently, on a visit with her father to the Dover air force base to collect the remains of a Navy Seal killed in Yemen, Ivanka wore a dark blue jacket with broad labels and black stripes down across the shoulders, in an attempt at stately remorse.

Ivanka and the rest of the Trumps are new to this political world, and there will be much for them to learn. Ivanka, though, has the added challenge, now that she takes her position as the most influential woman in the world, to recreate the style we associate with a uniquely feminine strength.

It won’t be easy. There has never been another woman like Hillary Clinton who was able to amass the kind of political power she had. Does Ivanka have those kinds of ambitions? Who knows? But either way, her style will inevitably grapple with the influence of Hillary Clinton, a true American original. 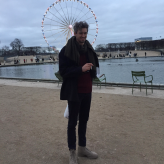