It’s a new year with new styles trending in the fashion world. Although, let’s not forget about the fashion of 2016 forever because it has evolved and inspired looks of this year and styles to come. The year of 2016 was indulged by politics and activism as the Presidential Election was taking place. This has created stylish statements along the way that will be seen on the runways this year.

The statement look is brought back with the new era of expression. Many designers have stylish slogans that will allow your shirt to do all the talking this year. Like the look above from Designer Christian Dior who received praise for her “We Should All Be Feminists” tee.

With the rise of feminism females are bringing pink back along with it. As you can see Pink is the color for 2017. Above is a look featured in Givenchy Pre-Fall 2017 collection.

Fur is everywhere and can be worn in different ways. Fur coats, fur scarves, fur shoes and even fur hats have all made its way on the runway. Although, furs have previously been featured with neutral tones. This year, designers have optimized in incorporating color in the latest fur fashion styles. Let’s be honest, fur with a touch of fun will make us feel fabulous. Featured above is Just Cavalli Pre-Fall 2017 collection.

The Pantsuit has been brought back politically recently with looks from Hillary Clinton. Although, other designers such as Fendi featured about have forever mastered the pantsuit and bringing it back on the runway with a touch of sophistication.

After seasons of the 70’s we have finally made our way into the 80’s. The era of the 80’s look with feature dramatic ruffles, puffed up sleeves, and stripes. Featured above are looks from Marc Jacobs 2017 collection.

What has been your favorite trend of 2017? 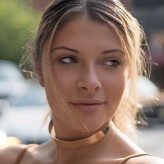