Let’s begin by saying that green is a pretty cool color — but most of us can agree that it’s a hard one to wear. By now you must have already seen many articles talking about Pantone’s 2017 Color of the Year. Naturally, you probably chose a side, one that was either “I Agree! It’s a Nice One!” or “Uhh… No.” Or maybe you are among those in an awkward zone between yes and no. If that is so, I understand where you’re coming from.

When I found out that Pantone had chosen a hue of green as the new color of the year I got a bit excited. Yes! I thought, but suddenly…. it didn’t look too new to me. It is described as a “fresh and zesty yellow-green shade that evokes the first days of spring when nature’s greens revive, restore and renew. Illustrative of flourishing foliage and the lushness of the great outdoors.” It lost me at first days of spring, and left me feeling like Miranda Priestly for florals. By simply looking at the color I didn’t get excited. I was looking forward to a radical color for 2017, so when I knew it was going to be green I agreed, but the one I imagined was grittier, olivey, acidic, and simply unusual; and I suppose more wearable. But again I’m not an expert like the professionals at Pantone’s Institute of Color, so after learning the reason behind why Greenery was picked it made me less skeptical.

Every year since 2000, Pantone has forecasted a color of the year based off world-wide factors including culture, political events, the entertainment and film industries, fashion, all areas of design such as architecture and home interiors, technology, and many more lifestyle categories all go into analysis for this decision. Leatrice Eiseman, Pantone’s Color Institute executive director explains that the concept behind choosing Greenery as the Color of the Year for 2017 comes as a result of having a truly terrible year in 2016. “Greenery bursts forth in 2017 to provide us with the hope we collectively yearn for amid a complex social and political landscape” said Eiseman, “This is the color of hopefulness, and of our connection to nature. It speaks to what we call the ‘re’ words: regenerate, refresh, revitalize, renew. Every spring we enter a new cycle and new shoots come from the ground. It is something life affirming to look forward to.” Pantone’s vice president, Laura Pressman says that Greenery is about “unity and community—connecting to oneself and others and a higher purpose, nature.” Inspiring, isn’t it? It actually sounds perfect.

As somebody involved in trend forecasting, paying attention to my surroundings as much as possible, and absorbing information from the runway, magazines, museums, social media, anything every day, I was also seeing lots of green. If you’re not so sure about using the color Greenery, just know that it was chosen not only for fashion and home decor, but for many other uses. Thus, it’s the general idea what is being promoted. In Pantone’s Color of the Year press release they explain how this color can also fit into Beauty, Graphic Design, Travel, and Food and Beverage. It doesn’t necessarily mean that the exact tonality 15-0343 TCX is mandatory, it means that it was the best contender when choosing a green that was versatile and carried the message of new beginnings. It’s not an easy job! Besides, there are close cousins like Herbal Garden, Dark Citron, and Lentil Sprout that are subtle and aesthetic. Go green! 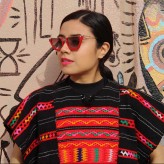